Tōma Minami (南 冬馬 Minami Tōma) is a primary school student in class 5-1 who is the youngest member of the other Minami family and the only girl.

Touma is a total tomboy: she acts tough, uses the masculine pronoun ore, and is considered "cooler than guys" by her girl classmates. She usually dresses in simple tee shirts and jeans, except when she must wear her school uniform.

She has three older brothers, Haruo, Natsuki and Akira, who seem to know nothing about her. They are often vexed about what to do about her boyishness, and hold "councils" to that effect. They also struggle to find her appropriate Christmas presents. Touma's tomboyish habits can be said to be the result of growing up in an all-male household, though she would most likely deny this.

Despite her overt masculinity, she is very skilled at handicrafts, including sewing. She is known to have made many outfits for the Minami sisters, and even a maid's uniform that Makoto is made to wear. She is also implied to be a voracious consumer of manga.

Tōma is voiced by Nana Mizuki.

Chiaki Minami becomes aware of Touma when Uchida and Yoshino mention that there is someone with the last name Minami in class 5-1. Curious, Chiaki heads over to class 5-1 with them to find out about Touma. Chiaki, Uchida and Yoshino arrive to find Touma confronting a boy in an aggressive manner. It is then that Chiaki decides that Touma will become her younger brother, despite her gender. Touma reluctantly accepts, confused, and is told to head to the Minami Residence after school.

At first, Touma is introduced to Haruka Minami and Kana Minami as a boy. However, she eventually reveals the truth. From then on, she becomes extremely close to Chiaki, with whom she spends much of her time. Their relationship is as Chiaki intended: like that of siblings. She usually spends more of her time at the Minami Residence than at her home, the other Minami Residence.

She develops a friendship with Makoto as they both share similar gender troubles. Touma learns of Makoto's identity as "Mako-chan" fairly quickly. Makoto usually goes to Touma for help when he has issues maintaing his feminine identity, and even borrows a swimsuit from her so that he can go to the beach with the Minami crowd.

Fujioka, as clueless as ever, believes that Touma is a boy. Touma does not thing to stop this misconception, and actually furthers it so that she can talk about soccer with Fujioka. Touma is then forced to constantly hide her true identity for Fujioka, which causes many problems. Nevertheless, she manages to become friends with him, as they both share similar interests in sports. Fujioka even tries to make her train to get rid of her "chest fat", something she knows will never happen.

Tōma is of the average height for her age, similar to Uchida, Yoshino and Chiaki, but Tōma is slightly shorter than Makoto and her eyes are slate grey, though they sometimes have a blueish tint. Her hair is varies between blueish grey and blue and it is styled in a boyishly short manner. When Kana examines the chest development of Chiaki's friends at a "pajama party" in season two, it is revealed that Tōma is more developed than Uchida, Yoshino and Chiaki. Kana quips that "Tōma is the most feminine" out of all of them, in contrast to her behavior. Indeed, Fujioka notices Tōma's "chest fat" as well. 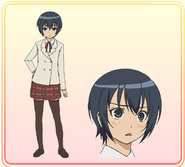 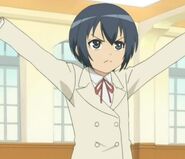 Makoto and Tōma are often in the same boat
Add a photo to this gallery
Retrieved from "https://minami-ke.fandom.com/wiki/Touma_Minami?oldid=10030"
Community content is available under CC-BY-SA unless otherwise noted.